Most people on the keto diet discover, at one point or another, that their sweet tooth simply goes away, and they have no sugar cravings whatsoever. Many claim not to use sweeteners at all. You may find it difficult to give up sweets completely, especially in the beginning. There are many low carb sweeteners on the market, both natural and artificial, and while some of them can be safe to use, others might kick you out of ketosis.

But how can a sugar-free sweetener raise blood sugar levels, you might ask.
Well, most of them aren’t really carb-free, as their labels say they are. A whole bunch of protein bars and similar products are stuffed with sugar alcohols, and again, while some sugar alcohols can be safe to use and won’t affect your weight loss, others can boost your blood glucose levels just as regular table sugar would.

Let’s check out the types of sweeteners commonly known to be low carb and safe for a ketogenic diet, and understand how they really affect your weight loss.

Generally speaking, there are several classifications of sweeteners: natural sweeteners, synthetic sweeteners and sugar alcohols. For a ketogenic diet, my personal opinion is that natural sweeteners are best to use because they don’t spike blood sugar levels, while still sweetening perfectly.

When you decide to buy a sweetener, always check for ingredients on the packaging. In case you notice the presence of fillers, such as maltodextrin, dextrose or polydextrose – skip them, because they can raise blood sugar levels.

The most important thing you should look for is the GI. GI = Glycemic Index, which measures how much a certain food raises your blood sugar level, and it goes from 0 to 100+. Many sweeteners have zero GI, meaning they don’t spike blood sugar levels. Sweeteners with the lowest GI are best for a ketogenic diet. 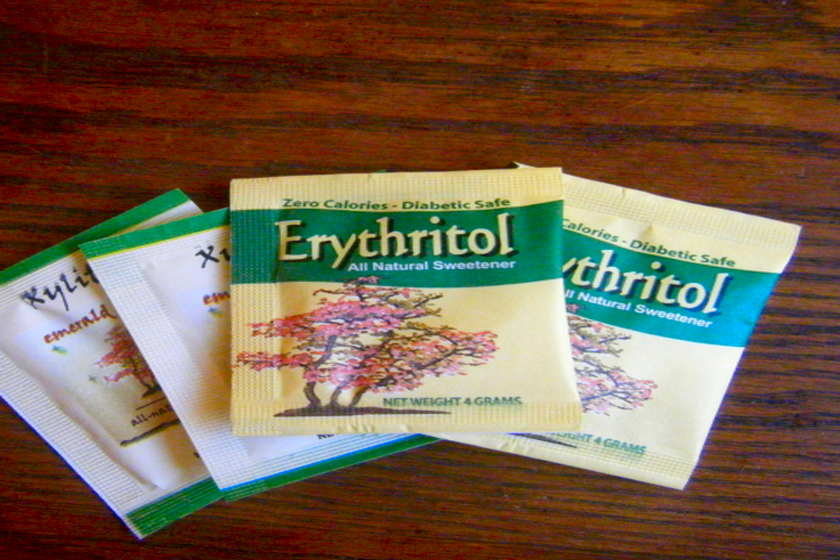 Typically found in fruits and veggies, and commonly extracted from corn, erythritol doesn’t raise sugar blood levels as bad as maltitol does, and it has very few calories, too. Unlike most sugar alcohols, erythritol doesn’t cause a significant stomach discomfort because it is almost completely excreted through urine. Some studies have shown that it can, still, provoke slight discomfort, but only when taken in large quantities.

According to studies, erythritol doesn’t affect blood sugar levels in healthy individuals, which is why it is one of the primary sweeteners used for a ketogenic diet.

By a strict chemical definition, maltitol isn’t a carbohydrate; it is a sugar alcohol capable of spiking blood sugar levels almost just as high as regular table sugar. While it does contain only half the calories of actual sugar, its glycemic index is far too high for a ketogenic diet. Maltitol syrup is even higher in GI, and it goes up to 75% of the effect on your blood sugar that regular sucrose does. Just like other sugar alcohols, it doesn’t get fully absorbed by the body, but still, an average of 68-75% of it does get absorbed. Figure that for every 4g of maltitol syrup, you will get the effect of 3g of sugar.

Maltitol hides in many products, such as “low carb” protein bars or nutrition bars.

The Atkins bars, for example, are filled with maltitol, and while they are promoted as carb-free, they are, in fact, far from that, and could easily kick you out of ketosis. Due to the current US laws, products similar to the Atkins bars are allowed to calculate maltitol out of the net carb counts, which leads to many people consuming hidden carbs without knowing.

Xylitol is a natural sugar alcohol, found in veggies and fruits. It has a relatively low glycemic index, so it doesn’t boost blood sugar levels dramatically. Many people on the keto diet love this sweetener because its sweetness is quite close to the one of regular sugar.

The downfall of xylitol lies in stomach discomfort, as one of the biggest complains. If you intake more than 65 grams a day, your blood sugar levels will raise a bit, plus you will end up with diarrhea. It is safe to use only in small doses. Note that xylitol is lethal for cats and dogs, so if you have pets, make sure you keep it out of reach.

Stevia is a natural sweetener and it has reached tremendous popularity over the past several years. It has been shown that stevia actually lowers blood glucose and insulin levels in diabetics, and has no effect whatsoever on the GI of healthy people. It also slightly reduces blood pressure.

Inulin is a sugar fiber extracted from chicory root. With such a low glycemic index, it is safe to use for a keto diet in optimal doses. Studies have shown that our bodies can absorb some of the inulin we intake, so even though the packaging might tell you otherwise, keep in mind it might have more net carbs than shown.

Inulin shouldn’t cause any gastric discomfort if used in normal daily doses, which is up to 20 grams. It is usually mixed with other sweeteners, and does a great job when mixed with the right ones, such as erythritol. 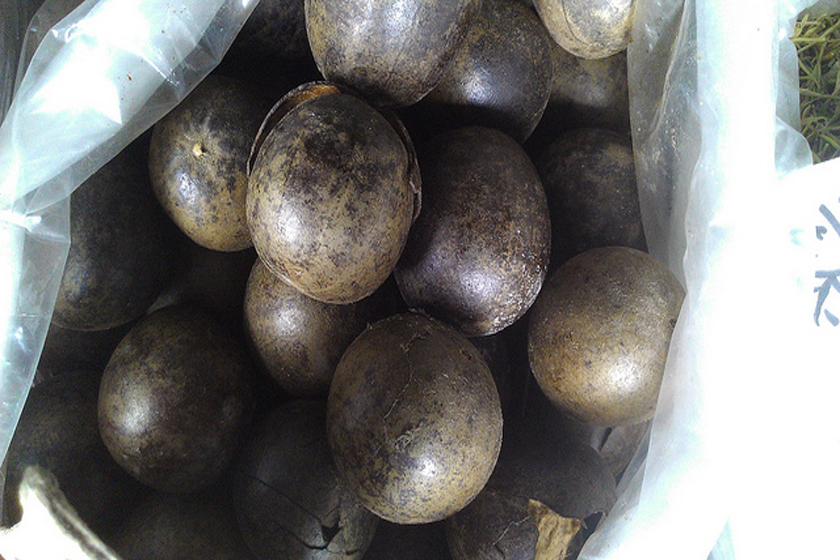 Also known as monk fruit, Luo Han Guo comes from China. It is 300 times sweeter than sugar, and it has been used for a long time as a traditional medicine for treating obesity and diabetes.

Unfortunately, it is often hard to find and very expensive in its natural, pure form. Usually, when you purchase Luo Han Guo, you are purchasing a mixture with many other sweeteners inside, and many of those are high in GI, therefore not worth trying out, because they will kick you out of ketosis.

Probably the most controversial sweetener in the world, aspartame, is used for producing many popular sweeteners, such as NutraSweet, Equal, Spoonful and Equal-Measure. Many stories of horrific diseases have been related to it, from Multiple sclerosis, methanol toxicity, systemic lupus, to blindness or brain cancer.

None of these controversies have been confirmed in official studies over the last 40 years, but still, given the fact this is one of the most thoroughly studied sweeteners, it may be best for you to avoid it, as there are many better sources of sweetness. Better safe than sorry, I say.

The glycemic index of sucralose is a controversy on its own. Many sources claim different numbers, but there is an average of around 80 in powder form. This is even higher than sugar and it can spike blood levels dramatically – so you should definitely avoid the powdered form if you are practicing the keto diet. The most commonly used sweetener made out of sucralose is Splenda.

Good news is, sucralose can be found in a liquid form, too, but the glycemic index isn’t exactly clear for the liquid version. This one goes a long way when it comes to sweetness – it is 600 times sweeter than sugar. Since you have to use such a small amount, it shouldn’t have much of an impact in blood sugar levels. Still, use it with caution and ONLY in small doses.

Saccharin is one of the oldest synthetic sweeteners around. It has been in use for over 150 years, but its popularity has gone downhill, since in the 1970’s all saccharin products had to state out a warning label on their packages, saying it may induce cancer. During the 2000, this was removed, since the animal based testing isn’t ethically allowed to be done on humans.

Saccharin is still used in the top 3 synthetic sweeteners (such as Sweet’N Low), and it is between 300 and 500 times sweeter than sugar. While many sources state that its glycemic index is as low as zero, it is still best to avoid it, if you can.

Being on the keto diet doesn’t mean you have to completely give up eating sweet things. When the sweet tooth kicks in, you have to satisfy the little devil, we all know this. The important thing here is to make sure you use the proper sweeteners, and avoid the ones that might kick you out of ketosis. Let’s face it, eating a protein bar that’s going to take you right back to the start line isn’t worth it.

Use stevia and erythritol to bring some sweetness into your keto life, and avoid the controversial sweeteners if you can. After all, there is a whole bunch of tasty treats you can prepare using safe sources of sweet, instead of buying suspicious products with unclear labels. Always watch for the GI on product packages, and keep track of the ingredients you welcome to your body. For any gym junkie, owning your own personal gym could very well be the ultimate fantasy in life. If...

How Do I Know If I’m in Ketosis?

For those of you looking to lose weight and get in shape, you might think that dieting sucks. But... If you’re trying to get in shape, it doesn’t matter which diet protocol you happen to be following, it’s...

Why You Need a Food Diary on Keto

Most diets geared towards weight loss often take the stance that fat is bad! This demonising of fat and... How to Overcome a Stall on Keto

If weight loss is a key objective for you, following a ketogenic diet plan is certainly one of the...

Keto and Macros: Why Macros are Important for Low-carb Weight Loss

For people looking to shed those unsightly pounds of fat whilst preserving as much lean muscle mass as possible,...

Can You Ever Have Too Much Fat on Keto?

For years, decades in fact, human beings unfairly victimised fat and blamed it for what seems like all the... If you’re struggling to lose weight, you may wish to consider changing the way you approach your diet and...

When people think of diets and weight loss, generally they don’t tend to envision themselves enjoying delicious treats like...